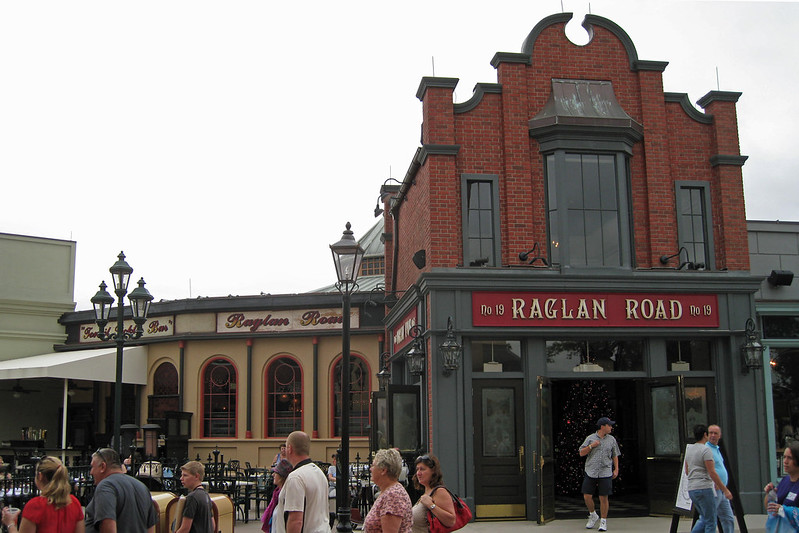 I was skeptical that I would enjoy Raglan Road—it just didn’t seem like something that would be my cup of tea.  So despite making the decision to stop in for a bite—I had my guard up.

“Raglan Road” by Beau B licensed under CC BY 2.0

And wow—was I surprised by what this Irish Pub and Restaurant—and specifically its stage performance—had to offer.  It was awesome, to say the least.

If you have no idea what Raglan Road is all about, think about it this way: take Riverdance and put it in the middle of an Irish pub.  That, my ever-attentive readers, is Raglan Road.

I’m not entirely sure what I expected when going into it for the first time.  Maybe I was expecting a cheap, somewhat corny attempt at an Irish-themed restaurant; some clovers hanging from the ceiling, an Irish flag or two draped across the walls.  I didn’t know about the dancing, certainly, and I had no idea that the food was going to be incredible.  Whatever picture I had in my head, however, was completely obliterated by reality.

Nestled in the middle of the newly-renovated Disney Springs (formerly Downtown Disney), Raglan Road offers a fun, festive entry into a (slightly touristy) version of Ireland.  But fear not, because though it is not likely to be as authentic as an actual trip to Ireland, there are no clovers hanging from the ceiling, and no cheesy attempts at forced Irish nationalism.

So here, today, I am going to give you an honest review of Raglan Road, Disney Spring’s salute to our neighbor across the Atlantic.  It’s might sound too good to be true, but this fact is this place really is this good.

I’m going to rate each section out of five stars.  The idea, of course, is to help you make a decision based on a more holistic approach from someone who has been there.  More than once, I might add, and so I can claim with confidence that this is on my list of the top five best Disney restaurants (well, in my humble opinion of course).

Thankfully, the décor is not cheap.  It’s actually quite elegant—very large and spacious, with grand, sweeping crown molding, doorways, and staircases.  It’s like a high-end steak restaurant met with an Irish pub, and they sent their kid to a prep school, where he went on to graduate from Harvard and become a successful businessman.

The point is that it’s very, very nice, without a hint of Americanized-Irish-Pub idiocy that abounds in most of our cities.  I suppose if you’re looking for soccer trophies and orange and green flags, then you’re in the wrong place.

But why do that to yourself?  Don’t trade this experience for a dank, local bar decorated to look like it its Irish.

The place is always packed, with reservations being a really, really good idea.  I said the dining room is spacious, but it is spaciously packed with people, and it can be difficult to maneuver.  Really difficult, in fact.  It can also, as one can imagine, be hard to hear what anyone is saying in such a busy place.  The noise level is quite high, so any hope of an intimate conversation is out the window.  With that being said, though, the place is always so busy and loud for one reason: live entertainment.

Aside from a few short breaks every hour, there is a live band playing Irish music.  On that same stage, a small group of Irish dancers (3-4) entertains and wows the crowd.  Most of the time, they are performing in unison, but sometimes either of the groups takes a break.  When the band takes a break, the dancers dance to a soundtrack.  When the dancers take a break, the band plays.

There’s also a second, higher platform in the middle of the dining room, where a beautifully-dressed woman dances either solo, or as a call-and-response kind of deal with the dancers on stage.  Where the other dancers wear “traditional” Irish dance costumes, her gown is more ornate and flowing, and accompanies the theme of her solo song.

Plus, if you have kids, they involve the kids in the show periodically throughout the night.  Watching a group of kids try to Irish dance was . . . well, even if you don’t like kids, it would be difficult not to enjoy that at least a little.

In terms of service, the wait staff has always been very kind and welcoming.  Busy, of course, and sometimes hard to get a hold of as a result, but always as attentive as possible when there are a couple hundred guests to which they must attend.  There was a slight issue once at the door, when they tried to seat us at the bar, but aside from that, the staff has always been very accommodating and warm, helping add to the overall inviting atmosphere.

Really, then, the ONLY downside here is that the place is crowded and generally noisy.  But, then again, you once spent several hours waiting to ride “It’s a Small World,” so you’re used to noise and crowds.  At least this noise is entertaining.

Welsh Rabbit may be my favorite soup, and Raglan Road did it well.  In fact, they did it better than any other version I’ve ever eaten, including my own (and, not to pat myself on the back, but I make a mean Welsh Rabbit).  It is, basically, a broth of Worcestershire, beef stock, and Guinness stout, slow-cooked, then mixed with a sharp, Irish cheddar cheese.  They called it a different name – Guinness Stout and Cheese Soup, I think – but it was something else, let me tell you.  Notice, though, that I say “was.”  It’s no longer on the menu.

However, I have fortunately had other things there, which are still on the menu, and I’m more than happy to discuss them.  Things like the fish and chips, for example.  Aside from going to Ireland or the United Kingdom for fish and chips, this is a pretty decent plate of food.

I’ve only had better in one other place, and that was Prince Edward Island, a Canadian Province that specializes in all things seafood.  So if you’re going to come in behind someone on the ol’ Fish and Chips Meter, it’s reasonable that it would be a maritime province.

They also have a phenomenal shepherd’s pie, with a meaty, gravy-ey, slow-braised vegetable goodness.  Oh, and the Colcannon is pretty decent, too:  buttery cabbage and bacon mixed into creamy mashed potatoes.  So while I tell you about the beer cheese soup – just in case they are merciful and bring it back by the time you get to eat there – there are several other options for you to enjoy.

As far as kid’s menus go, this one’s good.  It’s got a decent selection – typical stuff, of course, like grilled cheese, chicken fingers, and a burger – but it also offers fish and chips and a mini-shepherd’s pie.

They also have four side choices, which include, among other things, fresh vegetables.  I’ve never personally met a kid who would choose steamed vegetables, but if you want to play the Parent Card and order it for them, it’s available.

As I said, as far as kid’s menus go, Raglan Road is good.  As far as a Disney menus go, in general, this one is top-notch, and the food quality is excellent.  And if they happen to bring back the soup, order it.  You’ll be glad you did.

As always, let’s discuss the bottom-line:  what are you paying for this dinner theater?  In terms of real-life affordability, it’s Disney, so . . . pack some sandwiches, or something if you’re not willing to drop a little extra money.

That’s just the reality of eating at Disney World.

However, as far as Disney prices go, this is pretty middle-of-the-road.  It’s certainly not the ice cream cart in Future World of EPCOT (at roughly $5 a teat), but it’s also not Victoria & Albert’s (at $200-$300 a person).

Dinner runs about $20 a plate, on average, with lunch clocking in at a slightly lower $18 on average.  Kid’s items are roughly $8.  As always, though, I’m an advocate for saving money without being stingy, and one thing you can do is hit a couple of appetizers, which will run you about $18 for dinner.  It’s not much of a savings, admittedly, but it will save you a buck or two, and give you the bonus opportunity of trying more than one kind of food.

Their alcohol menu is extensive, with several kinds of draft beers, a handful of bottled beers, an impressive wine selection, and a dozen or so mixed drinks.  Beers average $7.50, wine averages $12 a glass, and mixed drinks run from $11.50-$14.50.

As I said, you could certainly pay more for a meal, but less may mean you end up having ice cream for dinner, or it will land you somewhere like the ABC Commissary; you don’t want that.  Trust me.

So is Raglan Road worth the time and money?  Is it a good value?  You have, no doubt, gathered that I am going to say, “yes” (because you’re pretty smart—I can sense it), but why?

Let’s condense this into something a little more digestible:

It’s family friendly:  there is a decent kid’s menu, and they go out of their way to actively involve kids in the show

The food is excellent:  whether it’s something simple and basic, like fish and chips, or complex (like lamb lollipops), the food is wonderful, no contest.

It’s not only for families:  If you’re looking for a fun time with your spouse or significant other, sans kids, this place still works.  It may not be the most intimate of settings, but it isn’t a dinosaur-themed madhouse of screaming children, either.

Full drink menu:  If you’re really looking to go Irish, there are a large number of beers on-tap (but there are other, less Irishy drinks, too)

The entertainment:  Hands down, this is the best part of the entire experience.  The dancers are not some second-rate, couldn’t-get-into-any-other-place dancers, but are engaging, charming, and talented people who appear to take what they are doing seriously, and enjoy it as well.

Crowds:  Yes, it is crowded, and yes, you should make reservations (which shouldn’t be too difficult).  However, the crowd only exists because of all of the above reasons.  If it weren’t crowded, we should be very suspicious, in fact.

What’s all of this mean?  It means that, taking the price into consideration, as well, I would give the place four out of five stars.  This place is totally worth the price, and way better than stopping over at some chain restaurant on the outskirts of Orlando, just to save a few dollars (and definitely better than eating a cardboard burger at one of the less desirable places in the parks).  If you can swing a trip to Disney Springs for dinner one night, check this place out.

What about the rest of you?  Anyone been here before?  What are your thoughts?  Share them below!

Final Verdict:  A real pot o’ gold at the end of a Disney-hued rainbow